Tommy Flanagan, born July 3, 1965 in Glasgow, Scotland, is a Scottish actor who plays the role of Chibs Telford on the FX original series Sons of Anarchy. Making his debut in the series' premiere episode, "Pilot", in the series' first season, Tommy plays the role of the current President of the Sons of Anarchy Motorcycle Club Redwood Original (SAMCRO). Based in Charming, California, he is formerly Vice President, and before that Sergeant at Arms, and unlike most of the club's members who are American, he is Scottish. The Irish often refer to him as "The Scot", and he is nicknamed 'Chibs' because of his facial scars ("chib" is Scots slang for a knife or stabbing tool), which were given to him by his nemesis, Jimmy O'Phelan. Playing a recurring role through the series' first, second, third, fourth, fifth, sixth, and seventh seasons, he was extremely loyal to Jax, the club's former President, appeared to be an increasingly fatherlike figure to Juice, and was last seen in the series' finale episode, "Papa's Goods", in the series' seventh, and final, season.

He was born July 3, 1965 in Glasgow Scotland. He was the middle of 5 children and at the tender age of 6, his father abandoned his mother. He grew up in a very rough part and admits getting into some trouble, but that his mother Betty always kept him in line. He worked as a Painter, Decorator and Disc Jockey. One night, as he left a pub he was working at, people told him to give them his coat and records and when he refused, a guy jumped on his back, stabbed him, and scarred his face. He nearly died. When he saw his face after his intensive recovery, he cried thinking that he could not return to his old life again. His close friends Robert Carlyle and his wife Caroline suggested acting for him. He said it wasn't for him but then on a second thought, he decided to give it a go. He worked in the Rain Dog theater for 3 years before Mel Gibson gave him his first big break in Braveheart (1995). Gibson, seeing what a wonderful actor he was, gave him another, even bigger role. It was at his request that his nickname be Chibs, which is what his cheek scars are called. Sutter wrote that in for him when he landed the role and it's been his identifier ever since. 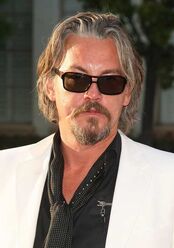 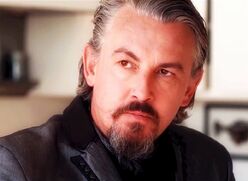 Add a photo to this gallery

Retrieved from "https://sonsofanarchy.fandom.com/wiki/Tommy_Flanagan?oldid=40945"
Community content is available under CC-BY-SA unless otherwise noted.