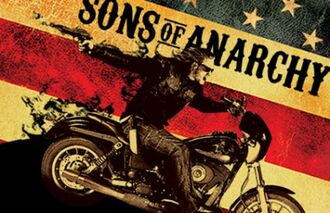 A spinoff series, Mayans MC, was created which occurs two years after the events seen in Sons of Anarchy. Creator Kurt Sutter refers to it as the second chapter of a four-part story.

Sons of Anarchy MC, is a motorcycle club that operates both illegal and legal businesses through its many charters in various U.S. states, some Canadian provinces and at least three charters overseas. Specifically, the MC's mother charter, Redwood Original (aka SAMCRO) combines arms dealing with an automotive garage, plus involvement in the pornographic and prostitution industries. Residing in Charming, CA, SAMCRO acts as the unofficial protector of its small town and holds the respect of its people. The charter however is not as united as it may outwardly appear. President, Clay, likes it old school and violent; while Jax, his stepson and the club's VP, has thoughts about changing the way things are, based on his dead father's manuscript & intentions for the club he founded decades ago. Their conflict has effects on both the club and their personal relationships.[1]

SAMCRO is an Acronym for 'Sons of Anarchy Motorcycle Club Redwood Original'.

The third season of the series attracted an average of 4.9 million viewers per week, making it FX's highest rated series ever, surpassing FX's other hits The Shield, Nip/Tuck, and Rescue Me. On February 3, 2012, Sons of Anarchy was renewed for two additional seasons, a fifth and a sixth. After the release of the 5th and 6th season Kurt Sutter announced the seventh season stating it would be the last season of the series and that Sons of Anarchy would end in a "big" way. The first episode of the seventh season of Sons of Anarchy aired on September 9, 2014 the last episode aired on December 9, 2014.

There is more to the Sons of Anarchy, please click the references number and read what ever is on the link. Thanks for your co-operation. [2] The cast below is listed according to the opening. Veteran regular members are above new regular members if they'd occupied the same place in the opening (that explains why William Lucking is above David Labrava, for example) and Ron Perlman and Maggie Siff are credited higher because of their characters' importance, which, according to Kurt Sutter, only puts them below Charlie Hunnam and Katey Sagal.

"The Culling" Writer: Kurt Sutter & Dave Erickson Director: Gwyneth Horder-Payton November 24, 2009 #212 The entire SAMCRO family goes on lockdown inside the clubhouse as Jax and Clay prepare to battle The League. A.J. Weston learns the truth about Ethan Zobelle's business dealings in Charming. Applying what she has learned from Gemma, Tara ensures her position at St. Thomas Hospital.

Start a Discussion Discussions about Sons of Anarchy