"Out" is the first episode of the fourth season of the FX original series Sons of Anarchy, and the series' fortieth episode overall.

Jax, Clay and the other SAMCRO members are released from prison after 14 months for federal weapon charges and return to Charming where they encounter a new sheriff and an Assistant U.S. Attorney who set up a secret task force to nail the club for their dealings with a Russian gunrunner. Meanwhile, Opie and Lyla get married and Jax proposes to Tara.

SAMCRO coordinates a plan to wipe out the entire Putlova family, as revenge for Jax and taking over all the family's businesses and securing income for the MC.

Opie: “I vow to treat you as good as my leather and ride you as much as my Harley” 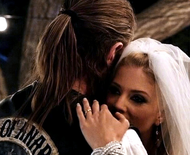 The Sons are released after spending 14 months in prison, but they're not prepared for the amount of change happening in Charming. Otto receives a gift in his food from CO Parce, in the shape of a razor blade which he uses to cut his wrists. This gets him out of solitary confinement and into the company of a Russian who attacked Jax while they were in prison. Otto stabs the Russian in the ear, exacting vengeance for Jax.

Gemma and Tara appear to have grown closer. Piney warns Tara not to dig up the past. History is history. Unser is out as chief of police and Charming PD is no more. The San Joaqin Sheriffs Department has sent a new man, lieutenant Eli Roosevelt, to take charge of law enforcement in Charming. He isn't as friendly to SAMCRO as Unser was, insisting that now that the club is on parole, they can't wear their riding leathers or have any gang-related attire. Clay insists that they're a club, not a gang, but the Lieutenant isn't listening.

Jacob Hale Jr. is now Mayor Hale and has big plans for Charming. He has allowed a new housing development (Charming Heights) to be built in town, which doesn't sit well with the Sons since it will put their gun-running trade in jeopardy. Clay enlists Unser's help in stopping Hale.

Lieutenant Roosevelt is contacted by Lincoln Potter, an Assistant US Attorney who has been trying to build a RICO case against SAMCRO. Roosevelt suspects that Potter only wants his help because he is the local police commander but Potter reassures him that he respects his background in gang crime. Potter introduces his team - FBI Agents Lane and Grad Nicholas, an ATF Agent, and an ICE agent named Vance. Potter reveals that there is an FBI agent named Ronald Worski working undercover with the Viktor Putlova's Gulag of the Russian Mafia and that he expects to use him to gather evidence about both the Gulag and the MC's involvement in arms dealing.

Clay and Gemma discuss how many years Clay has left as leader of SAMCRO. Clay's arthritis is acting up and if he's in too much pain, he can't ride, which would make him useless. Gemma also expresses concerns about Unser, who since his ousting from his job, has taken to remaining in his trailer. His cancer has gotten worse, and he needs weed supplied by Gemma in order to ease his pain.

Jax and Tara spend time with their kids, and Jax gives Thomas Teller Jr. (their younger son) a ring to offer to his mom. Tara doesn't exactly say yes, but she doesn't scoff at the idea either. They both realize that if they want their kids raised right, they can't stay in Charming. Knowing about Clay's health issues, Jax says that Clay won't last much longer as SAMCRO leader. He'll wait until Clay steps down before leaving. 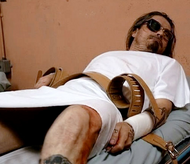 Opie and Lyla's wedding is held on a Native American reservation, which keeps out the cops. The Russians are also at the wedding, and they're there to do a little business as well, showing off their new AKs to the Sons. However, a Russian shived Jax while in prison, and SAMCRO needs vengeance.

What results is a bloodbath. Otto takes the opportunity to slip out of his binds and kills the Russian that tried to kill Jax in Stockton State Prison‏‎ by stabbing him in the ear with a knife. 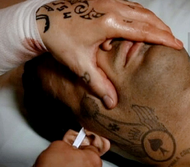 Bobby, Chibs, Juice, and Happy all travel out to the storage facility that the Russians own to check out the guns. They all load the weapons and quickly turn on the Russians. They open fire in a firing squad form and execute three of Putlova's men as well as undercover agent, Ronald Worski. 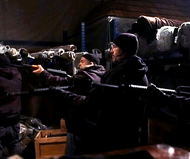 Back at the wedding, Clay, Jax, Tig, Kozik, and Viktor Putlova head out to the woods to check out the gun that Putlova gave Opie for a wedding present. Clay begins to test it by shooting it at a tree. He then turns and shoots one of Putlova's bodyguards. Tig shoots the other one and Kozik takes the opportunity to grab Putlova. Jax exacts his revenge on Putlova by stabbing him three times in the abdomen. Jax mimics Putlova's words earlier and states that this is just business. Putlova is dropped to the ground, dead. 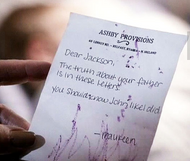 Gemma discovers that a piece of paper Abel has been drawing on is a letter from Maureen, which means Tara must now know the truth behind John's death, and Gemma and Clay's roles in it.

Bobby: I knew that 2 years of community college would pay off.

Opie: Even at a small percentage, the new guns are pretty sweet. Mayans, Italians, Niners, everybody loves them.

Jax: Small percentages are over.

Clay: Piney, Ope, Chibs, Kozik. You did an outstanding job holding us together, making this new business work.

Chibs: You did all the hard work, brother. We just grunted out the day-to-day.

Clay: Well, you got my deepest appreciation.

Tig: Yeah, thanks Ope. You too, Chibby.

Clay: So, you know anything new with our mayor's new little McMansion utopia?

Opie: The rich yuppies are fleeing Stockton. The city is a war zone. We're hearing that Hale has a shitload of presales and just needs a few more investors before he starts swinging hammers.

Clay: This uh, Oswald Construction bid. What is that? Is that some sort of consulation prize from Hale?

Piney: When Hale pushed that 99 on-ramp through the city council, all that timberland went eminent domain, and Elliot, he lost millions. So Hale is letting him make it up with lumber and labor.

Kozik: Charming has pretty much embraced it, Clay. It'll provide construction jobs, doubles the output at the mill.

Clay: Short term. Hale's building homes in this town no one in this town can afford. Anybody else see a problem with that? I mean, Jacob Hale's been laying this track for more than 5 years now. City councils, zoning committees, getting rid of Charming PD. (shakes head) No. We're not gonna let this happen.

Jax: The black and proud Sheriff Roosevelt. Who the hell is he?

Chibs: We don't know much. He's out of a gangland task force from Oakland.

Jax: Yeah, I guess today was about letting us know it ain't gonna be business as usual.

Clay: We're gonna have to dig pretty deep into this guy.

Piney: You're not gonna get this sheriff on your payroll. This boy's a straight up cop.

Chibs: Alright, the meet is set with Putlova. The Jellybean Lounge.

Jax (scoffs): What is it with Russians and strippers?

Opie: Ain't strippers. Have you been to the Jellybean? It's horse meat in a G-string.

Tig: I- I love the Jellybean, man.

Juice: Of course you do.

Happy: I love it too.

Juice: And the freak circle is complete.

Opie: Yeah, the Wahewas are gonna let us use the uh, southeast reservation. The exit off 18. Be there at 6:00. And I know how much money is in those envelopes so those wedding gifts better not be bullshit.

Clay: Alright, we all got our marching orders. (everyone stands up) Hey. This is a very big day. So let's get it done.

SAMCROpedia has 0 images related to Out.
Community content is available under CC-BY-SA unless otherwise noted.
Advertisement