When old bones are discovered on the outskirts of Charming, Clay is forced to deal with secrets he buried long ago.

The episode begins with Jax giving Tara a lift home. They pass by some construction workers digging up human bones. Jax notices that they are being followed. After some prodding, Tara tells him that Agent Kohn is an ex who won't leave her alone. Jax gets right on it, stabbing Kohn's radiator and warning him that next time it will be him. He then goes straight to Deputy Chief Hale to let him know what Kohn's true agenda is. 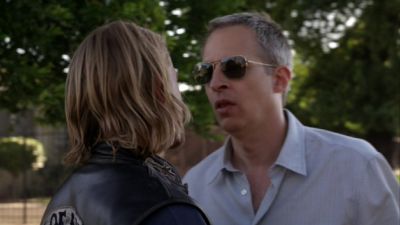 Cherry watches Half-Sack box. She isn't the only one. The club looks on and sees an opportunity to make some money. Cherry is going to stay with Bobby for a few days as Half-Sack is not to have any sex, drugs or alcohol until the big fight. Hale finds Tara at the hospital to ask her why she didn't let him know that the agent was her stalker. She said that nobody believed her in Chicago. Hale says that Kohn's boss did not know he was investigating in Charming; Kohn is being sent home and won't bother her again.

It turns out the bodies dug up by the construction workers are the handiwork of the club. One of the mechanics, Lowell asks for permission to have his child at work. Clay agrees and praises him for his good work. The depth of Agent Kohn's mental instability becomes clear when he is seen breaking into Jax's house, urinating in Abel's room.

At Bobby's house, Cherry rejects his advances telling him that she is not going to be passed around anymore. Bobby eventually agrees. At the hospital Clay, Tig and Jax go to the morgue in search of the recently dug up bodies. They find that one of the bodies is Lowell's father. Clay admits to Jax that although Lowell's father was not a patched member and just a mechanic he was actually a casualty of the gangland war. Lowell does not take the news well. 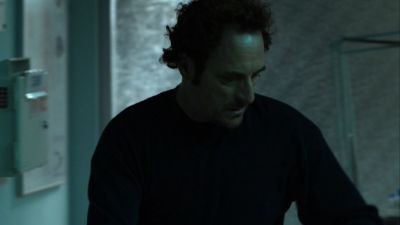 Jax watches from above on the roof. He continues to read his father's manuscript. Agent Stahl and Deputy Chief Hale tell Lowell the bad news about his father but it quickly turns into an interview as Stahl sees an opportunity to get information from the inside.

Gemma sees the damage to Jax's house and tells him. Both he and Chief Unser go to find Kohn at the barber shop. Jax throws him through a window and beats him, Kohn stabs Jax is the leg with a pair of scissors, angering him and causing him to beat him even more savagely. Stahl and Hale arrive on the scene, and to question them. The barber claims that Jax was acting in self defense after Kohn stabbed him. It is revealed that Kohn was violating several laws, including a restraining order against Tara, and fabricated his investigation into the Sons of Anarchy, he is arrested and promptly told that his career within the ATF is over.

The prospect wins a fight while Gemma worries about Jax's attachment to Tara. Lowell has gone missing. Clay worries he may have slipped back into old drug use. He is right. Lowell is upset and tries to shoot Clay. Clay has been shot at many times before and will be again. Lowell is no match for him. Lowell is quickly on the ground and Clay's sympathy has a limit. He tells Lowell that his father was a junkie who treated his family badly. Clay points that Lowell is behaving in the same way. Lowell wants Clay to kill him and for a moment Clay considers it.

Half-Sack continues to win until he is told to take a dive for the club. Once he started winning, the club started betting against him. Gemma wants to know where Jax is headed with Tara. He tells her it is none of her business. Clay talks to Cherry who reiterates that she is only there for Half-Sack. He said that is alright by him. When she hugs him, Half-Sack (still fighting) sees, gets angry and wins the fight (thereby costing the club a lot of money). Clay agrees it is his fault but the club must find the money by the end of the week. In the back of a van lies Lowell, still very much alive and clearly detoxing. Clay says he kept him around because he is a good mechanic.

Jax is waiting for Tara. He tells her Kohn has gone. Jax is afraid that Tara came back because she knew that he would be the one person who could keep her safe. They sit on the step together and nothing is resolved. Gemma asks Clay where Lowell is. He replies with SAMCRO rehab. He also tells her that they he told both Jax and Lowell parts of the truth. It appears the two may know a little more than they are telling.

John Teller: Inside the club, there had to be truth. Our word was our honor. But outside, it was all about deception. Lies were our defense, our default. To survive, you had to master the art of perjury. The lie and the truth had to feel the same. But once you learned that skill, nobody knows the truth in or outside the club; especially you.

Jax: Can you distract the doctors?
Tig: Yeah. No problem…Excuse me, ladies. How you doing? Uh, you're doctors, both of you?
Female Doctor: Yeah.
Tig: Oh, thank god. Um, a Doberman pinscher took a chunk of my ass.
Female Doctor: Oh, god.
Tig: Wait, can we just…
Female Doctor: You need to go to the E.R.
Jax: Distract 'em, I said distract 'em, not scar 'em for life!
Tig: No shit, man, I'm serious, I think it's infected.

Clay: I understand you decline Bobby's request for some comfort.
Cherry: Yeah, I did. I'm not about that anymore.
Clay: If I was to ask for some comfort, would you be about that?
Cherry: No, sorry, but your old lady would turn us both into chum.

Tig: Go on, get out of here, before I rape both of you.
Bobby: Hey!
Tig: C'mon, it's just an expression. Term of endearment.

Jax: And all 3 of them were Mayans?

Clay: Back in '92. Mexicans tried to expand their Oakland dope base, set up a charter in Lodi. We couldn't let that happen. It was a bloody 2 years. Bodies dropped.

Jax: Yeah, I remember. That was right around the time my old man died.

Tig: We gotta stop the PD from ID'ing those bodies, man. I mean if they flag the Mayans, we're their next stop.

Jax: Well we can pull teeth to stop the ID, but they can still DNA test.

Bobby: Forensic tests on 3 bodies? (laughs) That would blow half of Unser's yearly budget.

Clay: Yeah but if Hale thought it would hurt us, he'd get his new fed buddies to float the cost.

Tig: Shit, man, that was pre-OJ, right? I mean we weren't thinking about DNA right back in '93. What kind of clues we got buried with those Mexicans?

Chibs: If they don't know they're Mayans, they won't take it any further.

SAMCROpedia has 8 images related to Old Bones.
Retrieved from "https://sonsofanarchy.fandom.com/wiki/Old_Bones?oldid=46742"
Community content is available under CC-BY-SA unless otherwise noted.