Sons of Anarchy
Register
Don't have an account?
Sign In
Advertisement
in: Unsourced quotes, Characters, True IRA,
and 7 more

Edit
watch 01:38
Who is Jimmy O'Phelan?
Do you like this video?
Play Sound

Stabbed in the chest by Chibs Telford

James "Jimmy" O'Phelan was a street boss and the face of the True IRA group who sold guns to SAMCRO on the FX original series Sons of Anarchy. Played by American actor Titus Welliver, Jimmy makes his debut on the episode "Balm" in the series' second season. Playing a recurring role through the series' second and third seasons, he is generally regarded as Chibs Telford's archenemy. One of the three main antagonists in the series' third season (the others being Hector Salazar and Keith McGee), Jimmy meets his demise in the Season 3 episode "NS".

He is only answerable to the Real IRA army council, who he later betrays. The IRA Army Council purposely stays out of the spotlight to avoid capture and imprisonment. They are not involved in the day to day activities of the group, as they only make important decisions. Jimmy runs the day to day activities and recruitment. He also keeps the heat away from the council.

O'Phelan also shares a long history with Chibs as it was he who kicked Chibs out of the IRA and banished him from Ireland. He then married Chibs' wife Fiona Larkin and adopted his daughter Kerrianne Larkin-Telford. Jimmy is also responsible for the scars on Chibs' face.

When Jimmy O arrives in Charming to repair the True IRA's relationship with SAMCRO, he personally meets with Chibs and demands that he set up a meeting with Clay. Chibs initially refuses because of his personal feelings for Jimmy even though the meeting is in the club's best interest. Then, Jimmy O threatens Fiona's life and insinuates that he has taken a sexual interest in Chibs' daughter. It is unlikely that he would carry out the threat as his relationship with Fiona seems good, on the surface at least. Chibs, however, is blinded by anger and this is used by Agent June Stahl to talk Chibs into ratting out the IRA. Chibs gives up the info about the warehouse. O'Phelan later avoids capture by the ATF and gives SAMCRO the guns meant for L.O.A.N. for free to make up for Cameron and Edmond Hayes' betrayal.

In Season 3, Jimmy finds out the truth about Abel's whereabouts, but he feeds Jax misinformation to try and keep up the dealings between the True IRA and SAMCRO. At this time he also has fallen out of favor with the IRA army council and they are looking to remove him from power. He is currently in Belfast, where he is concocting a plan to throw SAMCRO off of Abel's trail. Father Kellan Ashby meets with Jax Teller and tells him that Jimmy has gone rogue from the True IRA and is trying to take over the IRA by removing their support base, part of which includes SAMBEL. 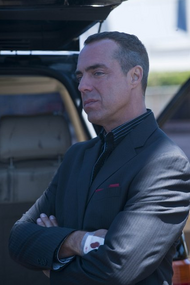 Jimmy tries to have Liam O'Neill, Sergeant at Arms of SAMBEL, kill SAMCRO by blowing up a gun shipment that the SOA are protecting. While all of this is happening, Jimmy is at the home of Maureen Ashby trying to take back Fiona and Kerrianne. He ends up killing Michael Casey. But is stopped by Gemma and Fiona who over power him and right hand man Donny. Gemma is close to killing him before Fiona stops her. Jimmy O and Donny then kidnap and torture Sean Casey for information about Abel Teller's whereabouts. Jimmy executes Sean. He and Donny kill the Irish couple that has Abel and then use the infant as leverage to ensure safe passage out of Ireland and back to California where Jimmy will make contact with the Russian Mafia. In a swap at a dock, Jimmy and Donny give Abel back to Jax, but they take Father Kellan Ashby as their new hostage.

Back in California, Jimmy attempts to buy safe passage to South America via the Russian Mafia. However, his Russian connection, Viktor Putlova, changes his deal with Jimmy and demands more money and a bigger discount on weapons in exchange for smuggling Jimmy out of the United States. Not left with much of a choice, Jimmy's man Donny retrieves $712,000 to pay the Russians in advance.

In the Season 3 finale, Jimmy is betrayed by the Russians; Donny is killed by the Russians and Jimmy is given up to SAMCRO, however he is taken into custody by the ATF shortly after. He is then recaptured by SAMCRO and then stabbed to death by Chibs, but not before Chibs gives Jimmy a Glasgow Smile similar to the one Jimmy gave him. His last words were "Take care of our girls Filip, Yeah?"

SAMCROpedia has a collection of images related to Jimmy O'Phelan.
Community content is available under CC-BY-SA unless otherwise noted.
Advertisement