SAMCRO plans retaliation on a rival biker club while dealing with a wounded Cameron Hayes in the clubhouse. Meanwhile, Jax, Bobby, and Opie aim to put an end to the gun debt for good.

The morning after shooting Josh Kohn and sleeping with Tara Knowles, Jax drives out to the woods in Tara's Oldsmobile Cutlass and buries Kohn's body. Back at the house, Tara looks in the mirror at herself with a glare on her face then suddenly runs to the bathroom to throw up. She looks at the blood stain that is still on her bathroom floor and breaks into tears.

Following the failed attempt on Clay's life, the Sons regroup at the clubhouse and are considering their next move. Cameron's condition is worsening and the club doesn't know where Jax is. Unser then arrives. With the two Mayans killed in the bar shootout and two women and a Nord at Darby's house, the body count for the previous night stands at five. Clay denies knowing anything about the murders, but Unser insists he come down to the station house.

Gemma and Tig turn up at Tara's house looking for Jax, and find him safe and sound. They tell him that he should go to the clubhouse and bring more medical supplies. They are also disappointed that he would rather be with his girlfriend than with the club at a time like this. Gemma says that if he wants to resurrect drama with Tara, to do it on his own time. Tig tells Jax never to forget his first priority. However, he tells them that it is not like that.

At the station, Clay discovers that Darby is also in custody. Darby tells David Hale that the Mayans tried to kill him, not SAMCRO. Hale tells him they have his statement, and they'll look into his accusation. Darby is angered by the comment, and punches Hale in the face. The officers restrain him, and Unser tells him to take Darby to holding. Darby shouts racist comments, and Unser asks him if he knows that he's married to a "dark-skinned woman". Darby says he knew that. Unser slugs him in the belly, and the officers carry him away.

Elsewhere, Jax and Tara meet at the hospital to discuss their future in light of Kohn's gruesome demise. The pair then head to the clubhouse where Tara treats Cameron's gunshot wounds. When he wakes up after surgery, Hayes offers the Sons the money they paid for the guns back plus a free month of weapons if they murder Brenan Hefner, the Oakland Port Commissioner who killed Michael McKeavey, as he is about to blow the whistle on an IRA gun shipment.

Back at the police station, Clay and Unser continue their conversation, and Unser further warns Clay of the effects of a gang war in Charming. Unser lights up a marijuana joint, and tells Clay that it's for his cancer. Then, a rumbling of motorcycles is heard on the streets, and Unser looks out to see SAMCRO's other chapters ride into Charming. Clay says there's only one thing that can make this work; he tells Unser to bring Marcus Alvarez to the station in order for the gang leaders to make a truce. After convincing Darby to let SAMCRO handle the retaliation against the Mayans, Clay meets Alvarez alone in a cell. Rather than exacting revenge, however, the club president strikes up a deal; the Sons will begin selling guns to the Mayans, and all Mayan-SOA disputes (over turf, businesses, etc.) end in the Sons favor. Alvarez also gave the Sons permission to kill his son Esai Alvarez, as revenge for the attempted hit on Clay.

Clay is later released from jail, and calls a meeting at Chapel. He informs the rest of the club about the meetings that happened. Piney is upset that Clay made such a big decision without calling a club vote, and Juice warns Clay that the One-Niners won't be happy about SAMCRO selling to the Mayans. Clay then calls a vote over the Mayans, and Jax tells the group that the Niners never showed any loyalty to the club anyway. The club agrees that they should sell to the Mayans, and Happy is elected to carry out the hit on Esai. The club then throws a party celebrating Clay's release.They discuss Cameron's offer and it is decided that Jax, Bobby and Opie will make the hit. Opie volunteers to pull the trigger himself to prove his loyalty to the club, which has been in question recently. When he leaves the clubhouse, Opie's wife, Donna is waiting to confront him, as he had told her that he would stop his involvement with the club.

The next day, Jax, Bobby and Opie head out to the motel in Oakland where Hefner is seeing his mistress, a 17-year-old Black girl named Eviqua Michaels. Opie waits outside Hefner's motel room, while Jax and Bobby keep watch. When Hefner leaves his room, Opie freezes and Bobby is forced step in and shoot Hefner at close-range with a silenced pistol. The trio then flee, but Eviqua was able to see the shooters. 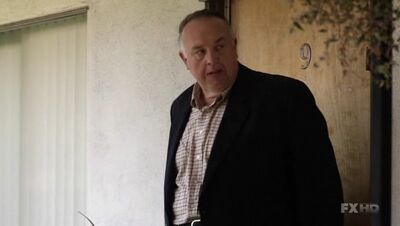 Meanwhile, at a park, Alvarez meets with his son, Esai. He tells him that he's not disappointed in him about the hits going bad. He tells him that because of the mistake, he had to sit down with SAMCRO to make a deal with him so that they can get guns. He tells Esai that it's because of him that they can make the deal, and he's proud of him. They go to get some food from a concession stand. Alvarez hugs his son, and tells him he loves him. Suddenly, the vendor at the stand reveals himself to be Happy, and throws an ice pick into Esai's neck. With that, Alvarez hands him the envelope, and they walk off.

During a montage, Happy is seen getting another happy face tattoo (he gets one done every time he kills someone) and Jax visits the grave that he dug for Kohn. He burns Kohn's body in the grave, and then throws his father's book into the fire. He suddenly has a change of heart and grabs it out of the fire, but most of it is burned up. He stares at the book realizing what he just did.

Hayes: Where the hell's your hand?
Juice: It's, uh-Well, my finger is uh, plugging up one of your bullet holes.
Hayes: You got your finger jammed up my ass?
Juice: No. No…well, technically, yes. But my finger's not jammed up your ass. It's kind of jammed in your ass.

Juice: Take him out? That means like kill him?
Chibs: No. I think what it means is dinner and a movie.

Unser: Someone went after Darby last night. They killed one of his guys, two women at his house in Charming.
Gemma: You think it was us?
Unser: I also found two dead Mayans in a ditch off 18 half a mile outside of town. Last time I looked at the scoreboard, Nords and Mayans were the away team.
Clay: Glad you're rooting for the home team, Chief.

John Teller: I never made a conscious decision to have the club become one thing or another. It just happened before my eyes. Each savage event was a catalyst for the next. And by the time the violence reached epic proportion, I couldn't see it. Blood came in every shade of life.

Clay: What happened last night can never happen again. Not just someone trying to off me, but bodies dropping in Charming 'cause of us.

Tig: We had nothing to do with the hit on the Nords.

Clay: Mayans went after me and Darby, alright? Different targets, same war. If we fire back, we can't stop the blow-back from hitting home. I sat down with Alvarez.

Clay: Unser's cage. We uh, we discussed our outstanding issues and made a deal.

Bobby: What kind of deal?

Clay: We sell them guns, they settle all their beefs with all of us. Any territory hassles, any business disputes, it all lands in our favor.

Piney: You made that call without a vote?

Clay: I set it up. We vote on it now. If this thing passes, you all sit down with the Mayans in your own territories, you work stuff out, take the win.

Juice: What about Laroy and the Niners? We've had a deal with them for years, that we don't sell to the wetbacks.

Jax: Juice, Laroy don't got no loyalty to us. He's been buying from other dealers, he reneged on the AK sale, ain't no reason at all we can't branch out.

Bobby: The peace we make with the Mayans could start something a lot worse with the Niners.

Clay: We'll deal with that fire when it catches.

Tig: You know, these assholes tried to kill you, man. We're supposed to just pretend that didn't happen?

Clay: No. No, that debt gets settled. But not by us. It's gotta be some outside charter. (to Happy) You up for it, Hap?

Happy: I'll do this thing. It'll be perfect.

Clay: Of that, I have no doubt. Everybody in favor of the Mayan deal-?