Caucasian-English
Charlie Hunnam, born April 10, 1980 in Newcastle, England, is an English actor who plays the role of Jackson 'Jax' Nathaniel Teller on the FX original series Sons of Anarchy. Making his debut in the series' premiere episode, "Pilot", in the series' first season, Charlie plays the role of the son of John Teller and Gemma Teller Morrow. Before excommunication, he was President, (previously the Vice President) of the Sons of Anarchy Motorcycle Club Redwood Original (SAMCRO) based in Charming, California, and SAMCRO is the only life he has ever known. Playing a recurring role through the series' first, second, third, fourth, fifth, sixth, and seventh seasons, he lives for the club, but questions the violent extremes it will go to for "business". Despite having lived for the club his entire life, he comes to acknowledge that he was nothing more than a criminal (like his father before him), and makes it his final ambition to make sure his sons never come to know the life of chaos he lived, as well as fulfilling his father's legacy. The main protagonist of the series, and only one of two characters to appear in every episode of the series along with Gemma, Charlie meets his demise in the series' finale episode, "Papa's Goods", in the series' seventh, and final, season.

Hunnam was born in Newcastle upon Tyne, to father William "Billy" Hunnam (1952–2013), a gangster and scrap metal merchant, and mother Jane Hunnam, a business owner. His maternal grandmother was the premiere portrait artist in Newcastle. Hunnam was the second child born after brother, and he later had two younger half-brothers, Oliver and Christian, on his mother's side. His parents split up when he was two years old and he moved to the village of Melmerby, Cumbria when he was 12, as his mother remarried. He went to Heaton Manor School in Newcastle, and after moving, he went to Queen Elizabeth Grammar School in Penrith, Cumbria. Hunnam got expelled from secondary school and did his exams from home. He attended Cumbria College of Art and Design, where he graduated with a degree in the theory and history of film with a side in performing arts. 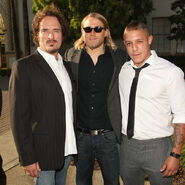 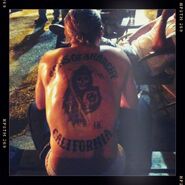 Add a photo to this gallery

Retrieved from "https://sonsofanarchy.fandom.com/wiki/Charlie_Hunnam?oldid=47601"
Community content is available under CC-BY-SA unless otherwise noted.